Here’s a bird you’ve seen in a previous Chirpy Challenge…what is it?

Check out the bill. How would you describe it? What do you think it might eat?

In different lights this handsome bird is not just black and white; what colours can you see?

Challenge – can you draw it?

This is the magpie. 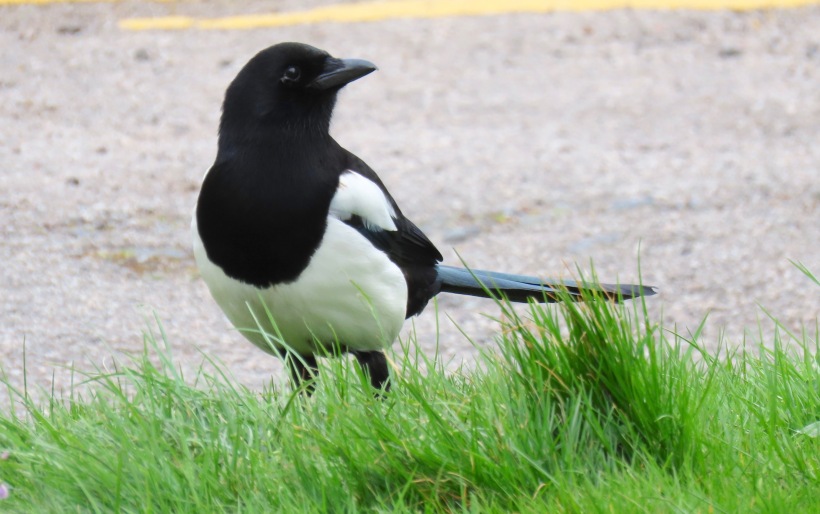 ‘Mag’ comes from the name Margaret – ‘the chattering one’ and ‘pie’ refers to their striking black and white feathers – you may have come across the word ‘pied’ in other contexts such as ‘The Pied Piper of Hamyln’.

This bird is one of the most colourful of the crow family.

Clothes – magpies whether male (Mr) or female (Mrs) have the same colouring.

Can you tell which is the male and which is female in the video?

In the crow family, the female is smaller.

Food – magpies will eat a varied diet. In the video above you can see them grubbing for insects. But these birds usually nest slightly later than the average song bird so that there will be meat on the table for their chicks – magpies systematically raid hedges and bushes looking for eggs and young in nests, as one of their food sources. 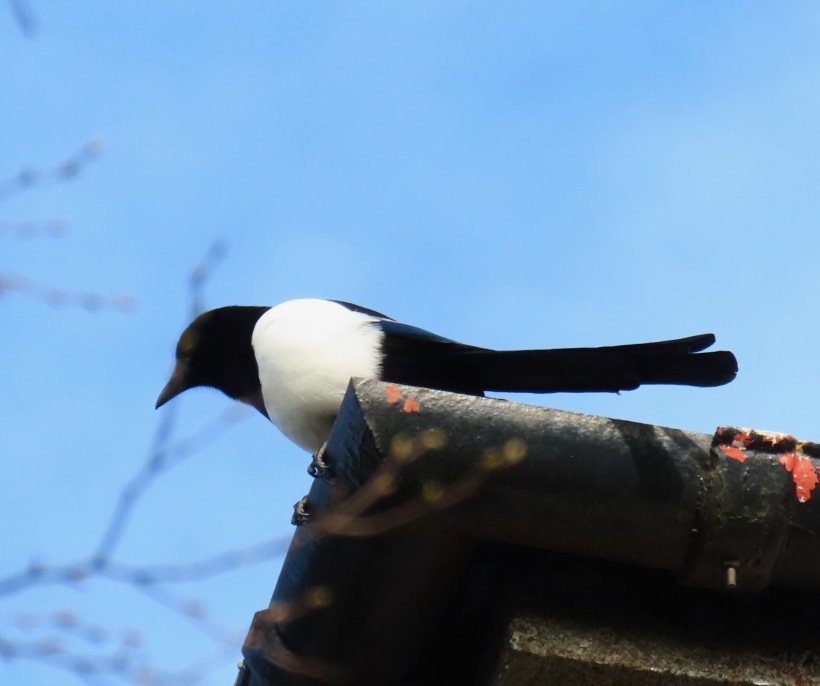 Community – these birds often congregate in winter and disperse during the nesting season.

The most I have ever seen together is 13. Sometimes people are superstitious about seeing magpies.

One for sorrow,
Two for joy,
Three for a girl,
Four for a boy,
Five for silver,
Six for gold,
Seven for a secret,
Never to be told.

Eight for a wish,
Nine for a kiss,
Ten a surprise you should be careful not to miss,
Eleven for health,
Twelve for wealth,
Thirteen beware it’s the devil himself.

What do you think this means? Maybe you could make up new lyrics

Calls – magpies have little to say, but I’m sure they must have meanings for their squeaky croaks! Listen here:

Challenge – how would you describe this call? Can you imitate it?

Movements and flight – magpies have a fluttery, swoopy flight; their wide wings and long tail help them to balance. They are watchful, and are usually cautious around humans.

When perched you will often see a magpie flip its wings and tail, calling at the same time, see the video below:

Nesting – magpies often reuse a nest. They are conical in shape, resting between branches.

Time for a tale: this is one of my favourite tales called ‘King Beetle Tamer’ by Isobel Wyatt

Magpies like the jackdaw in the story are attracted to shiny things.

Challenge – can you think up a story about a magpie finding treasure?

Be good to hear from you!

See you again next week 🙂

My work springs from my love of nature and supporting others to touch, discover and be in the outdoors. This work often intermingles with my love of story, music and song.